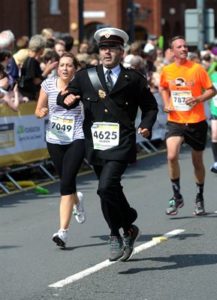 Clearly a man who loves a challenge, he will shirk the lightweight shorts and singlet favoured by most of the other competitors, in favour of the traditional military style uniform first worn by the early operational staff of Corps Security. Known as the Full Shout uniform, it is still very much part of Corps Security’s identity, although rarely used by those undertaking sporting endeavours.

However, this will not be the first time that Salman has run in this attire, having completed a 5k (3.1 miles) event two years ago. ‘Last time the biggest challenge was definitely the heat combined with a uniform that was never really designed to cope with running conditions,’ he said. ‘This time I felt it only right to increase the personal challenge, hence I am doing a half marathon which will mean running 13.1 miles. This will take me just over two hours and although I’m sure that the latter part of the race will be testing, the thought of raising as much money as I can for the Gurkha Welfare Trust will keep me going.’

As the leading Gurkha charity, the Gurkha Welfare Trust provides financial, medical and community aid to nearly 7,000 retired soldiers and widows in Nepal who have no other form of income. Most are now in their 80s and 90s and are heavily reliant on support for a secure and comfortable old age.

Asked why he chose to support this particular charity, Salman replies, ‘2015 marks the bicentennial of loyal Gurkha service to the British Crown. I’m incredibly lucky to work with a number of fantastic Gurkha colleagues at Corps Security and therefore proud to do my small bit at a time of such significance.  The recent traumatic earthquakes in Nepal have obviously exacerbated the problem – which has given me added impetus to achieve my goal’.

Anyone wishing to support Salman and help him reach his financial target can donate by visiting his JustGiving page at www.justgiving.com/SalmanShamim