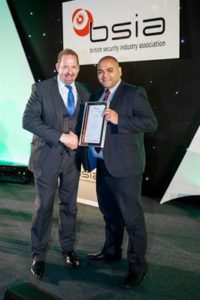 Now in their seventeenth year, the Security Personnel Awards mark the achievements and contributions made by those working in the UK’s private security industry.

Clarence, who lives in South East London, joined Corps Security in 2013 after working in the construction industry, and has made an overwhelmingly positive impression amongst colleagues and customers alike. He has been noted for his ability to consistently deliver an outstanding level of customer service and raise the performance of others he works alongside. Always willing to share his knowledge, he also provides voluntary mentoring for new recruits or younger members of the organisation, in order to make them feel welcome and to ensure that they conduct their duties in the correct manner.

On receiving his award, Clarence said, ‘After winning the regional competition, I’m obviously delighted to be named Best Newcomer at the BSIA National Security Personnel Awards 2015. The last two years have been fantastic and I’ve learned so much during this period thanks to the help and support of my colleagues at Corps Security. I’ve received first-class training and being part of an industry leading company that has such a proud history and values my efforts so highly has made me determined to go as far as I possibly can within my chosen profession.’

Thanks to his ‘can-do’ attitude, many of Corps Security’s customers have requested that Clarence remains on their sites as part of a permanent team. They have all remarked upon his approachable personality and ability to perform his role in a way that personifies Corps Security’s 156-year-old ethos of ‘loyalty, integrity, service’.

Peter Webster, Corps Security’s Chief Executive, stated, ‘We pride ourselves on employing people of the highest calibre in order to provide our customers with the best possible standards of service. Since joining us Clarence has performed his duties with a level of professionalism, skill and dedication that serves as a benchmark for others in the industry. He fully deserves the BSIA National Security Personnel Award for Best Newcomer and I wish him all the best for rest of his career.’

Corps Security is once again contracted to provide manned guarding for the Ministry... Corps Security appeals for Poppy Day
Scroll to top