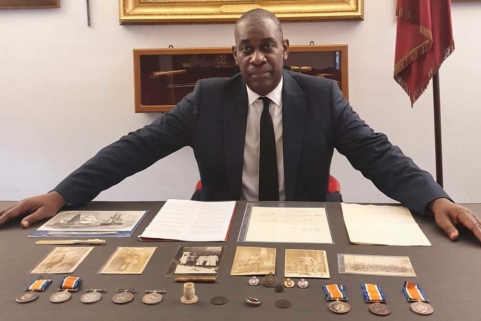 In celebration of Black History Month, members of our Corps Together Race Guardian Team met with Derek Liverpool. Derek is our Assistant Security Manager at Somerset House, who is on a very special mission to uncover the history of black people within the armed forces.

With British Guyanese roots, Derek’s family moved to the UK in the 1950’s, settling in West London. His parents were academics, so he grew up around books. However, although European history was taught in schools and widely discussed, Derek’s parents made sure he understood his own cultural history.

Over the years Derek’s interest in black history developed, and when he came across a war medal inscribed with BWIR and the name and serial number of the soldier it was awarded to, his interest peaked. BWIR stands for British West Indies Regiment, a unit of the British Army formed of volunteers from British colonies in the West Indies, during the first World War. This discovery marked the beginning of a very special journey to learn more about the role of black people in the forces as well as slavery, and the story of people of colour throughout British history. Over the years Derek has collected hundreds of items relating to black soldiers and their sacrifice in conflict, researching every individual item and piecing together the story behind its existence – knowing that behind every item is a person, who’s memory deserves to be preserved, honoured, and celebrated.

His ultimate mission is to trace origins of every item and reunite them with the families of every soldier. More than this, Derek hopes to connect young people with the past, bringing to life the heroism, achievements and sometimes the struggle of people of colour, who fought so bravely to protect our freedom.

Working with the National Army Museum and Imperial War Museum Derek collates records and information relating to every artefact and its previous owner. He hopes to launch a special education initiative which will see him issue packs to schools, challenging students to research the items, collecting as much information as possible about its owner and history, in the hopes of tracing relatives and handing over the articles.

Learn more about the incredible journey Derek embarks on in his spare time, which is a true salute to the Black Community, with such a strong link to Corps Security and its heritage.