You are here: Home1 / Rob Hill 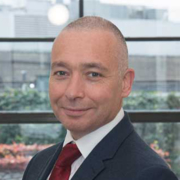 Rob has worked for Corps for more than 10 years and has been MD of Corps Monitoring for the past 18 months.

There are often misconceptions about security monitoring. What does your team do?

Our team monitors devices such as CCTV intruder or fire alarms, personal attack alarms, or even the detection of water or gas leaks – anything with a sensor that transmits a signal over IP. We patrol sites remotely using cameras and even give answers to questions such as whether the site’s broadband is working. We also support organisations to grant remote access. The signals come over the internet to our Alarm Receiving Centre (Arc) in Glasgow and our officers receive an associated alarm. Their response depends on the site or type of event. Sometimes people think that it’s just officers staring at walls of screens and CCTV. But it’s not like that anymore. Now it’s more about sensors, video analytics and AI. Most cameras detect movement, and then communicate the signal to us. Some are now so sophisticated that they can tell the difference between an animal and a person setting off an alarm. Our customers are both the security installers (those installing camera and sensor equipment for an individual or organisation who need us to monitor them) and end-users (the individuals and organisations who wants us to monitor their existing cameras and sensors).

It sounds like monitoring is about protecting property and assets?

Much of the work is about physical assets such as plant and property but we also focus on keeping people safe too. In that way, we’re just like security officers patrolling a building. We monitor TV and sports personalities and high-profile businessmen who rely on us to protect their homes and keep their friends and family safe. We also support lone workers who use personal attack alarms through our Corps Guard app. Through that we’ve often helped people escape from dangerous situations such as attempted kidnap and robbery.

There must be some memorable moments along the way?

Yes, we’ve had almost everything you can imagine. On the amusing side, we’ve seen an intoxicated man falling over a wall into a site who then couldn’t get out because he was so drunk. We had to inform the keyholder who went to site to release him. Then there were some naked hippies who were dancing through protected areas blowing kisses at the camera operators as they were issued with warnings to leave the area. There was also the time when a man armed with a gun was seen on a customer’s site. We reported it to the Police, who attended site with armed colleagues. He turned out to be a pest control officer commissioned by the customer – they had forgotten to tell us! Sadly our officers also witness upsetting things and we provide counselling when this happens. Armed holdups are the most common incidence we come across and we work very closely with the Police across the country. It’s key for us to detect potential offenders before they have the opportunity to commit crime.

How have you and the team been affected by the pandemic?

We’ve found that customers’ working patterns have changed quite considerably. Many sites that were only monitored at night are now unoccupied during the day so they need monitoring 24 hours a day. This has meant a workload increase while also having to ensure everyone’s safety through social distancing and deep cleans.

What would you say to anyone looking to join the security monitoring industry?

Join us! It’s a fast-paced industry that is challenging but very rewarding. Visit our Alarm Receiving Centre so we can show you what’s possible – you’d be really amazed what happens there.

Looking ahead, what’s the future of security monitoring?

There are constant improvements in cameras and technology. This is a sector which never stands still. Thermal imaging cameras, which can detect people with high temperatures is an example of technology being introduced into many buildings in preparation for the post-Covid return to work. We’ve also started to see automated access control around whether people are wearing the correct PPE, such as hard hats in construction sites, with signals notifying us if someone is not complying with the rules. Analytics are also improving constantly. We used to get lots of false signals from animals, birds or tree branches swaying in the wind. That’s much less of a problem now. Our systems are becoming so intelligent and that’s where the future lies.