You are here: Home1 / VR Training 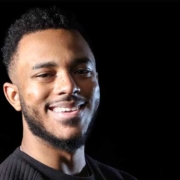 We spent five minutes chatting to MoonHub co-founder Dami Hastrup about how the technology is revolutionising the way security officers are trained.

Tell us how the technology works for security officers? Officers wear the VR headsets to complete each module which last between two to three minutes. The modules simulate the officer’s exact experience of their environment – we do 360 degree filming of the premises so it’s just like being there and experiencing it as it would happen. The modules we’ve created with Corps including patrolling, managing protests, dealing with suspect packages or aggressive/ unsatisfied customers, fire prevention checks, radio protocols, bag search protocols, and being aware of potential hostile reconnaissance among many others. Security is a high-awareness role. VR training allows officers to become familiar with difficult situations so they feel confident managing them in real life when they do happen. Some of the modules are also relevant to other front-of-house teams at the sites. And it’s a great tool for onboarding new staff.

What are the benefits of VR training? Research shows that immersing users in interactive VR training helps them gain knowledge up to four times faster. Retention rates can be up to 75% when using VR as opposed to the shockingly low 5-10% that standard e-learning provides. It’s also up to 64% less expensive than traditional training. Training using VR head-sets is also generally more enjoyable than traditional methods, so officers are more likely to want to do it which makes all the difference. Also, VR training provides a much deeper level of data about people’s performance which can help to plan future training and development – and it’s also something that the officers themselves can easily access on the online dashboard.

What gave you the idea for MoonHub and how did you go about setting it up? I graduated in business economics in 2016, having spent the previous few years working in my holidays and on placements for a variety of organisations as a business analyst. In that time, I’d come across many different training systems and we realised that they weren’t delivering what they set out to do. It was disengaging and ineffective. We wanted to change that. I already knew my co-founders Vinh Ly and Hannah Sutcliffe and we started talking through the idea of using VR to change training.  We talked to loads of big companies about what they’d like from their training system and then created MoonHub to deliver that.

Why did you call the company MoonHub? MoonHub got its name from the inspiration taken from the innovation used to get to the moon during the space race. We want to be a hub of innovation for many years to come.

What’s the future for this type of technology for the security sector? At the moment we’re using it to train officers on day-to-day tasks. But the sky is really the limit. If you think about the types of situations that security officers could find themselves in, then we could simulate terrorist attacks and even natural disasters and instruct officers in a real-life environment on how to deal with these threats.