Are you looking to achieve business security savings for your organisation?

Creating a cost effective model for your security delivery.

Organisations across the country are starting to plan their return to the formal office environment after Covid-19. But they’re finding that the security world has changed considerably. Some of the adjustments we saw during the pandemic – an increase in mobile patrols, a change in shift patterns and levels of cover and a significant increase in the use of security technology to complement officers on the ground – will endure as organisations adapt to new ways of using their corporate property portfolios.

Almost all businesses are looking at their real estate portfolios differently from how they did before March 2020. They typically want to achieve a saving in their building running costs, an increase in service standards while also using their buildings more flexibly as people opt for hybrid models of work – spending working time in both the office and home environments. Because of that, organisations are seeking a more flexible approach from their security relationships.

This is why we at Corps Security have created our business security savings calculator. It helps organisations to make informed and easy decisions about their security provision which therefore allows them to plan for an uncertain world post-pandemic.

The person in charge of the security provision, whether that’s a facilities manager, head of security or office manager,  just enters their manned guarding hourly charge rate and the number of security hours they currently use and clicks to see how their business security costs could be substantially lowered  through blending security monitoring technology with experienced security officers to protect the business’s property, key assets and, most importantly, people. 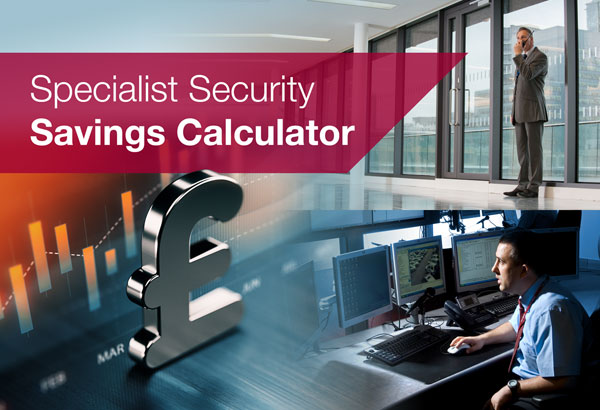 A Combined Approach To Your Security Provision

Corps Security provides both manned guarding and remote monitoring security services. This means that we’re ideally placed to provide advice on the most ideal blend for your business – most other security companies will always favour either officers on the ground or security monitoring technology, never a blended security approach. That’s because they focus specifically on those areas. The Corps Security approach gives you the confidence that an integrated solution will work for your business, both in terms of the level of protection offered and the financial investment required.

Pay More To Your Officers But Reduce Your Security Budget

As well as achieving business security savings costs for your organisation, an integrated approach to your security provision using security monitoring to complement security officers, allows officers to be paid in line with the Living Wage. This essentially increases their pay where it is currently below Living Wage levels. The benefits of paying the Living Wage are numerous. It properly rewards your officers for their hard work; it increases their motivation which ensures good staff retention. It is also the right thing to do. We at Corps Security are a Living Wage Recognised Service Provider while our Chief Executive Officer Mike Bullock is on the Living Wage Foundation’s Recognised Service Provider Leadership Group.

Corps Security was founded more than 162 years ago. As a long-standing organisation, we take our responsibility to our people incredibly seriously. The Corps of Commissionaires Management, now known as Corps Security, was created to provide employment for servicemen returning from the Crimean War in the 1860s. Our people remain at the core of everything we do. The Corps Security values of loyalty, integrity and service that were created when the organisation was first founded are as relevant to us today as they were back in 1860. They are the foundations of our ethos, the way we do things, as the UK’s longest-standing and most respected security services provider.

As you might expect for an organisation with strong links to the military, we play a key role in the communities we work in supporting military charities in particular Combat Stress, the UK’s leading charity for veterans’ mental health, and The Soldiers, Sailors, Airmen and Families Association (SSAFA), the national tri-service military organisation.

The Ultimate Flexible Approach To Security

We know companies want to make business security savings. At the same time, most organisations are also looking for more adaptable and flexible ways of using their corporate real estate as their employees look at different work models, including long-term home working. Because of this, many are exploring a more flexible approach to their security service.

There is no commitment involved in using our Security Savings Calculator, so why not see what you could save for your organisation while also providing the best level of security for your business into the post-Covid world?

Although it’s still quite new, our savings calculator is already receiving great feedback from the industry. See what your peers have to say.

“Corps led us through a detailed review of our client’s needs and the best options for meeting these in a changed landscape. We were able to discuss four possible routes to realising service efficiencies and cost savings. Reconfiguring hours and shifts were identified as the best option as there was no additional risk posed to the organisation or the safety and wellbeing of its people. The cost savings were a welcome benefit.“ Procurement Director, CBRE

Why not be part of these success stories and use the business security savings calculator to right-size your security service?