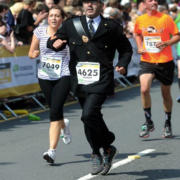 All your senses are intensified. Your hands are sweaty, knees weak and arms are heavy. You can feel your feet hit the ground hard in rhythm to your heartbeat, like a bass drum. You can hear roaring crowds urging you to keep going and you smell the Normandy coastline with every inhale. But throughout your systematic, controlled breathing you have one goal in mind – get to the finish line.

It sounds dramatic, but these are perfectly common feelings for those taking on a 44-mile ultra-run across the coastline of Normandy as Salman Shamim, key account director at Corps Security prepares to do on 6th June. The date marks the anniversary of the D-Day landings, to commemorate the fallen of the 1944 Allied invasion of occupied France for veteran’s charity, Combat Stress.

Known as the D-Day challenge, this charity event was first set up in 2009 by Lt Col. Mike McErlain and his wife Jo to raise awareness and funds for Combat Stress. The route, which hugs the Normandy coastline, will take in villages, fields, beaches and D-Day celebrations. Runners will start at Pointe Du Hoc and finish at the historic Pegasus Bridge the same day.

Salman, who last year was awarded Corporate Fundraiser of the Year by Combat Stress after running 12 marathons in 12 months and raising £2,300, will be putting his mind and body to the test again. This time not just by going the distance, but by doing so in ‘full-shout’ traditional military uniform (excluding the boots, he’ll sensibly be running in trainers) as a tribute to former Corps of Commissionaires.

Having been with Corps Security for 11 years Salman has been able to work shoulder to shoulder with some amazing ex-servicemen and women. However, he has also seen first-hand the detrimental effects of post-traumatic stress disorder (PTSD) and how challenging it can be for some individuals just to get through the day. It’s with this in mind that Salman is motivated to participate in such a unique event. These are people who work extremely hard and deserve help from the money raised. It’s also a way to pay respects to ex-servicemen we may have lost, as well as the fallen from D-Day.

At the end of his 44-mile run, Salman will be placing a wreath at the Pegasus Bridge Memorial for Commissionaires past. His goal is to raise at least £2,000 for Combat Stress and has already received donations from Corps Security CEO Mike Bullock and other staff around the business.

It’s safe to say, Salman has the full support of the Corps Security community and we wish him the best of luck with the challenge ahead and hope he fully indulges in Normandy’s famous cider to reward himself afterwards.

Good luck Salman, we’ll see you at the finish line.

If you would like to donate to Salman’s cause, you can do so via his JustGiving page.